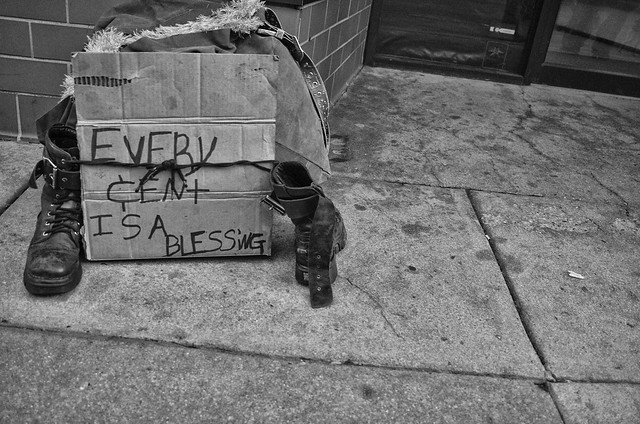 Denver is proposing the use of $1.8 million dollars of the city budget to bolster its security presence along the 16th Street Mall and the lower downtown district. Michael Roberts Westword piece

“Homelessness being criminalized in Ballpark neighborhood? Advocacy group says yes.’, points out a few better ideas of how to use the money.

this is my Colfax

I love this city

I met Irish & Juan today while walking Colfax. Irish approached me while I was photographing some graffiti and tags on a nearby building. “You want to take a real picture?,” asked the disheveled and orange-bearded homeless man. He had to talk his friend into joining him for the photo. The Hispanic man was reluctant to pose, but Irish was adamant and eventually coaxed his friend into the frame. I happened to have a pocket full of dollar bills so I emptied my pockets and handed them $3 each. As I was leaving Juan said “Only on Colfax” while shaking his head from side to side.

With each social encounter that I force myself to endure, I feel my anxiety towards these face to face interactions slowly fading away.

I am awkward. I can’t help it, I was born like that. I am self-centered, egotistical and opinionated. Aren’t we all? I am flawed but I am kind. That’s why it pains me to say that I feel like I have done the man in this photograph a disservice.

He and his friends were the best group of people I ran into on a Thursday photo walk. We shared a brief encounter and it was an experience that left me feeling great about people’s capacity for kindness. They called me over, they encouraged me to take their pictures, and we shouted some niceties at each other while I stuck my camera in their face.

This man took off his overcoat and showed me his intricate and colorful tattoos. The light was all wrong, the pictures of him all turned out bad, and I didn’t get the exact representation of the moment the way I remembered it with him.

I gave them all my name, thanked them, and before I left the presence of their company I went to shake his hand. He grabbed my hand with both of his hands as I thanked him. He seemed sincere in his kindness. It felt great to me.

A couple of days later I was back in the area, and I ran into him again. He was alone this time, but I recognized him from across the street, and as he crossed my path we shared Hellos. I said “What an odd coincidence seeing you again” and he agreed. The conversation was awkward, I felt like I should say something, but I wasn’t sure what. He asked me what I was doing and I told him I was “just looking for interestingness, just taking pictures seeing what I can see”

Somewhere in the awkwardness, it came up that he was sick of the “bullshit at the mission.” AS I write this I’m shaking my head at my inability to seize the moment and take initiative. I’m a journalism student, and here I am with a chance to form a bond with someone that obviously has an interesting story to tell, and I’m just not talking.

He didn’t say he was homeless, and I didn’t get that vibe from him in our initial encounter. As I realized that he was in some sort of state of displacement, but was not really coming out and saying it I became confused as to how to proceed with this social interaction.

So we began to drift apart, and the further he got away the less eye contact I made. I shouted after him to “stay warm” and went on about my business.

I’m ashamed to say that I believe I was not talking because I didn’t have anything to offer him, and once I realized he might be homeless I knew I didn’t have a place I could offer him to stay. It seems rather hypocritical to write something on the plight of homelessness and not really have anything to offer in the way of immediate assistance. So I feel like shit now.

I have a three-year old daughter and a wife in a small apartment on the other side of town. I don’t have a job so I can’t give him any money because I just really don’t have any. I don’t even have enough money to take him to get some lunch at a fast food place or something. It’s pathetic. I want to help him.

Instead of just saying all that to him, and sticking around, we just both let each other go on about our business. He might not even be homeless. Maybe he works at the mission, maybe he is just a traveler passing through town, I don’t know because I didn’t ask.

I just let him go. I didn’t tell him that I wanted another picture because this one turned out so bad. I didn’t offer him a helping hand, I didn’t try to keep the conversation going, and I didn’t even get his name.

I’m sorry for that kind stranger and I hope your path in life is a positive one. I’m sorry that we didn’t talk more. I’m still overcoming some social awkwardness. I have bad habits when it comes to dealing with people in public. I didn’t have anything to offer and I walked away.

The least I could have done was taken the time to get to know you and your story a little better. I had fallen victim to my own self-preservation. In this society of virtual conversations and online anonymity kind strangers are becoming fewer and farther in between. The ugliness of the internet gets to me sometimes. I cherish these moments of face to face interaction, even though initializing them is like pulling teeth. In my years of experience in socializing I have been burned enough times to know that you just can’t trust everyone. Since I don’t know you, I don’t trust you. I’m sorry for that. It’s just the way of the world. I feel horrible about it and the person it has turned me into.

a portrait of homelessness

“Bleak, dark, and piercing cold, it was a night for the well-housed and fed to draw round the bright fire, and thank God they were at home; and for the homeless starving wretch to lay him down and die. Many hunger-worn outcasts close their eyes in our bare streets at such times, who, let their crimes have been what they may, can hardly open them in a more bitter world.”
― Charles Dickens, Oliver Twist

I think of the homeless often, because I am surrounded by them on my daily wanderings throughout the streets of Denver. I have heard the argument that it would be wise to avoid photographing the homeless because you are somehow exploiting their plight for your own personal gain. I take this into consideration while I am out photographing in the streets, but I just cannot ignore the feeling I get when I come across a homeless person. I am overcome with the urge to photograph what I see as interesting, colorful, ordinary or out of the ordinary, the truth and reality. If I choose to ignore what I see as real, as something that is a problem, what kind of person would I be?

If all I ever shared were pictures of the beautiful people, the ones with the most interesting fashion sense, the ones that are juxtaposed in amusing ways, the ones who stand out in a crowd for whatever reason, that wouldn’t be reality either. I want to share my reality. I don’t want to leave out any of the gory details. For those that think I would take a picture of a homeless person for personal gain, you are right, I am looking to better myself as a person, contribute something to society by raising awareness, and feeling better about myself as a human being in the process. I don’t make one dime off any of my photography, and I am in fact deep in the hole financially because of it. I always tell the guys that carry signs on the corner, that they should probably be lending me some money. I am unemployed, I know for a fact those guys make more than me!

The best way to help: http://www.denversroadhome.org/

Today as I was driving home I was at a stop light and noticed the overwhelming smell of urine. I glanced out my window and this scene caught my eye.  You can’t live in Denver or the surrounding area without encountering its overwhelmingly large homeless population. It eats at my conscience every time I see them. I want to help, and the only way I know how right this moment is to spread the word and share my images to illustrate the reality of being homeless. I had an uncle who was a troubled soul and lived on the streets for most of his adult life. He passed away last year.

These are people, they aren’t just homeless people, they are actual people. They live and breathe and want the same comforts that we all take for granted far too often. Imagine if this was your son or daughter, an aunt or uncle, your brother, or your best friend from the 3rd grade.  We have to stop this disturbing trend of  just ignoring everything that is unpleasant or doesn’t fill our immediate needs. Homeless people are not just lowlife bums that don’t care about anything. They are people, and they need help.

1. Two out of three of the homeless in Denver are families with children.
2. Forty-two percent are women.
3. Nearly half of the homeless have jobs—just not a home.
4. Most panhandlers aren’t homeless and most of the homeless don’t panhandle.
5. The most common reasons people become homeless are job loss, housing costs, and the break up of a family.

Denver’s Road Home is a comprehensive, integrated plan that blends a “housing first” solution with responsibility, self-reliance and accountability.

A Fiscally Responsible Approach—Denver has been spending over $70 million annually on shelter, health care and other services for the homeless without creating long-term solutions. Denver’s Road Home provides a coordinated, efficient and long-term response that is fiscally responsible and will save taxpayers money.

A Regional Response is Imperative—There have been more than 10,000 homeless people estimated in the metro area, over 55% of these men, women and children live outside the City of Denver. Denver is collaborating with surrounding counties through the Metro Denver Homeless Initiative, including Boulder, Douglas, Adams, Jefferson, Arapahoe and Broomfield counties. These seven counties are working to expand affordable housing and shelter beds and to close gaps in services.

Self Reliance—The plan balances the provision of housing, treatment services and job training with expectations of personal responsibility and self-reliance from those who receive the services. It is about creating opportunity and helping people regain control of their lives.

“And those who were seen dancing were thought to be insane by those who could not hear the music.”― Friedrich Nietzsche