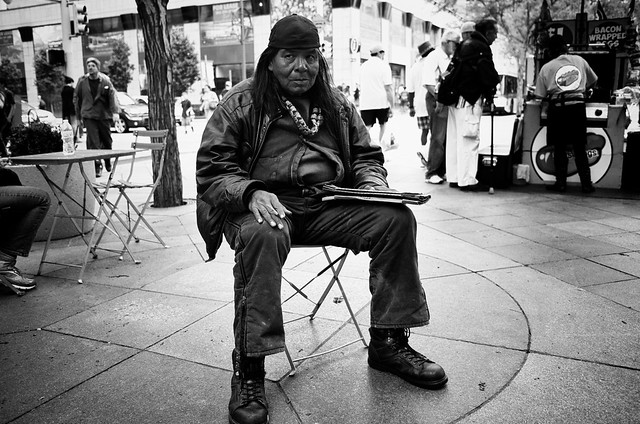 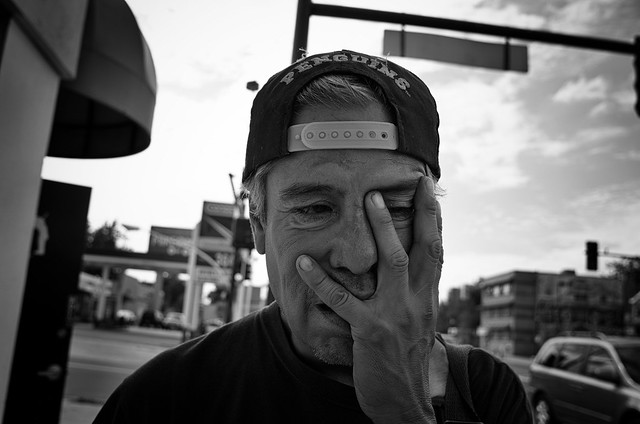 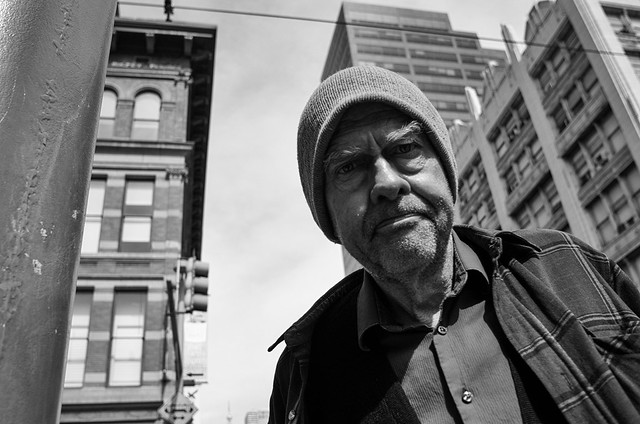 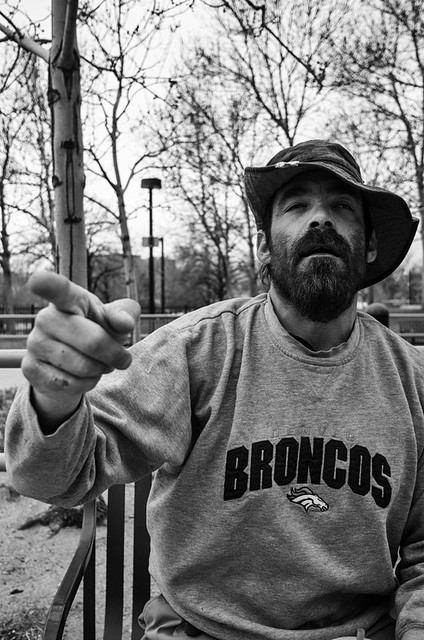 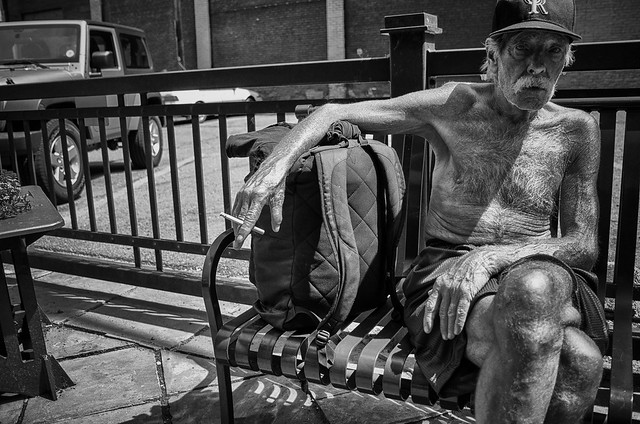 bourbon on his breath

he talked about religion

He said to me, “Have you been saved? I’m not perfect, hell, I’m drinking Kentucky Deluxe and Black Cherry Fago, but once you’re saved you’re saved for all eternity.”

Do you ever just want to blurt something out without all the planning and brainstorming? I do. Especially now that mid-terms are over. I guess we arent ALL college students though, so maybe some of you who read this won’t empathize with the “too much homework, tired of rules and deadlines” thing. What it comes down to for me is that I’m just mentally and physically exhausted. Full time student and dad duties are wearing me out. Through all the banal everyday problems that we all deal with in our day-to-day lives somehow we manage to lift our heads up out of the sand and carry on. So I try to block out the news and thoughts of religious extremists and deadly diseases creeping ever closer to my doorstep, and I search for that silver lining that is becoming increasingly harder to spot.

So I jumped on the train and rode it into the heart of Denver with my camera in search of stories and precious moments in time. I went to a zombie crawl. I found myself drawn to the minority. The regular people. Sure I took plenty of pictures of crazy zombie get-ups and the like but these are the ones that stood out to me in that crowd of images. I snapped around 1,000 frames in 4 hours. Here are 12 of them.

THANK YOU FOR READING MY BLOG!

leaning on a wall

Someday I will leave Denver. Until that day I will keep my camera on my person whenever I walk about its streets. I have recorded the lives of thousands of strangers in this city over the past three years. I silently observed and I learned a lot. Now I am curious to know the stories of the people I capture with my lens. This is still my struggle. The challenge of breaking the ice with strangers and getting to know them on a deeper level. I didn’t imagine it would happen over night, and I didn’t think it would be this hard.

In my efforts I have found that it comes to you if you open yourself up to it. I have spent time talking to more people. Mostly the ones who approach me first, but I have made decent headway in opening up the conversation. I enjoy the anonymity and quiet self reflection of capturing images as inconspicuously as possible, but I find myself wanting to know more when I stare back into the eyes of the human beings I photograph.

I guess it’s a natural progression. I hope so at least. Thanks for listening. I just wanted to get that out.

A colorful street sign signifies my presence at Marquette Street in downtown Albuquerque.

Commuters in downtown Albuquerque wait for the Rapid Ride.

Observing pattern, repetition, color, light and lines. All that from a brick wall and a telephone pole.

This 1982 Volkswagen Vanagon Westfalia is what drew us out to New Mexico in the first place. It was a decent enough specimen except for the really bad exhaust leak. The voices told us no this time. Our quest continues.

Shingles, pigeons and bushes are just a few of the interesting aspects of Raks Building Supply.

While my daughter and girlfriend were playing at a local park I wandered down a dead end road. It was unpaved and lined with several modest and unique homes.

Portrait of a home in Albuquerque.

A school bus and a minivan decorate the yard of this home.

Desert plant life is abundant throughout the area.

Albuquerque is filled with art.

The colors of Old Town Albuquerque.

My family and I have been traveling across the United States in search of a van that will be used to travel across the United States. We will be leaving within the next 9 months. The bus we found on this trip was not the right fit for us, but the trip wasn’t all for naught. I got the opportunity to explore Albuquerque with my K-5.

I spoke with an activist from Greenpeace about the effects of deforestation on our planet in between classes at Metro State University of Denver.

A light rail passenger walks the platform at the Arapahoe at Village Center Station in Denver, Colorado. The Regional Transportation District operates over 170 trains on 48 miles of track serving 2.2 million people in the metro area.

I am awkward. I can’t help it, I was born like that. I am self-centered, egotistical and opinionated. Aren’t we all? I am flawed but I am kind. That’s why it pains me to say that I feel like I have done the man in this photograph a disservice.

He and his friends were the best group of people I ran into on a Thursday photo walk. We shared a brief encounter and it was an experience that left me feeling great about people’s capacity for kindness. They called me over, they encouraged me to take their pictures, and we shouted some niceties at each other while I stuck my camera in their face.

This man took off his overcoat and showed me his intricate and colorful tattoos. The light was all wrong, the pictures of him all turned out bad, and I didn’t get the exact representation of the moment the way I remembered it with him.

I gave them all my name, thanked them, and before I left the presence of their company I went to shake his hand. He grabbed my hand with both of his hands as I thanked him. He seemed sincere in his kindness. It felt great to me.

A couple of days later I was back in the area, and I ran into him again. He was alone this time, but I recognized him from across the street, and as he crossed my path we shared Hellos. I said “What an odd coincidence seeing you again” and he agreed. The conversation was awkward, I felt like I should say something, but I wasn’t sure what. He asked me what I was doing and I told him I was “just looking for interestingness, just taking pictures seeing what I can see”

Somewhere in the awkwardness, it came up that he was sick of the “bullshit at the mission.” AS I write this I’m shaking my head at my inability to seize the moment and take initiative. I’m a journalism student, and here I am with a chance to form a bond with someone that obviously has an interesting story to tell, and I’m just not talking.

He didn’t say he was homeless, and I didn’t get that vibe from him in our initial encounter. As I realized that he was in some sort of state of displacement, but was not really coming out and saying it I became confused as to how to proceed with this social interaction.

So we began to drift apart, and the further he got away the less eye contact I made. I shouted after him to “stay warm” and went on about my business.

I’m ashamed to say that I believe I was not talking because I didn’t have anything to offer him, and once I realized he might be homeless I knew I didn’t have a place I could offer him to stay. It seems rather hypocritical to write something on the plight of homelessness and not really have anything to offer in the way of immediate assistance. So I feel like shit now.

I have a three-year old daughter and a wife in a small apartment on the other side of town. I don’t have a job so I can’t give him any money because I just really don’t have any. I don’t even have enough money to take him to get some lunch at a fast food place or something. It’s pathetic. I want to help him.

Instead of just saying all that to him, and sticking around, we just both let each other go on about our business. He might not even be homeless. Maybe he works at the mission, maybe he is just a traveler passing through town, I don’t know because I didn’t ask.

I just let him go. I didn’t tell him that I wanted another picture because this one turned out so bad. I didn’t offer him a helping hand, I didn’t try to keep the conversation going, and I didn’t even get his name.

I’m sorry for that kind stranger and I hope your path in life is a positive one. I’m sorry that we didn’t talk more. I’m still overcoming some social awkwardness. I have bad habits when it comes to dealing with people in public. I didn’t have anything to offer and I walked away.

The least I could have done was taken the time to get to know you and your story a little better. I had fallen victim to my own self-preservation. In this society of virtual conversations and online anonymity kind strangers are becoming fewer and farther in between. The ugliness of the internet gets to me sometimes. I cherish these moments of face to face interaction, even though initializing them is like pulling teeth. In my years of experience in socializing I have been burned enough times to know that you just can’t trust everyone. Since I don’t know you, I don’t trust you. I’m sorry for that. It’s just the way of the world. I feel horrible about it and the person it has turned me into.