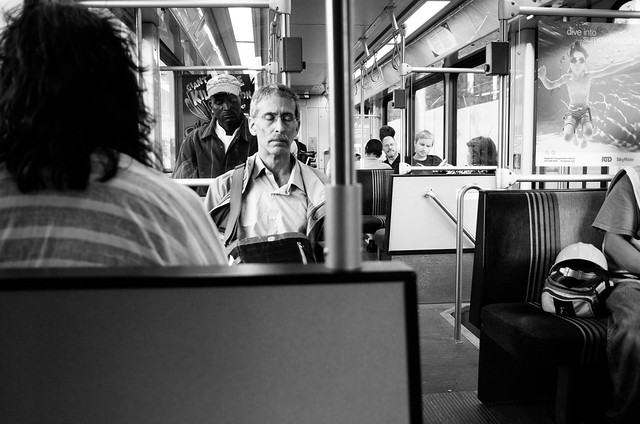 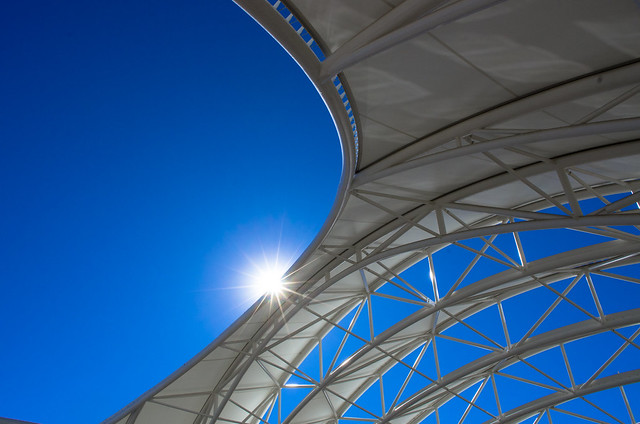 No matter how far away you stand your smoke still showers my face. I breathe in your stench as I sit on a cold metal bench made purposely uncomfortable out of iron slats. Homeless proof. Nothing a thick blanket couldn’t remedy. A sliver of the moon still hangs visible above me. The sun is rising in a thin soft yellow band across the horizon. It melts into the dark blue sky and sheds its light. The silhouettes of pedestrians move across the bridge. Old people push walkers, bicyclists pedal their bikes, mommies and daddies and little kids in a hurry. The half-awake masses stumbling to the starting gate.

That’s what the RTD security officer told me today at the I-25 & Broadway Light Rail Station. “So you out taking some pictures today?” he asked me after I removed my headphones. I was happily listening to the “Double Nickels on the Dime” album snapping shots off on my camera as I always do. I look up and here is this security guard in my face.

I nod yes in response to his inquiry on my activity. I am careful not to say anything. I look him in the eye and wait for him to leave or keep talking. He chose the latter. So he says to me: “Well you are allowed to take pictures, I can’t stop you from doing that, but I don’t understand why you guys take pictures down here, that’s what Google Earth is for.”

All I could do was laugh. I wanted to say to him, “So it’s okay for a giant corporation to take as many pictures in public as they want, but private citizens should think twice before doing the same thing?” Of course I didn’t say this to him,

I’ve been to jail for an extended period of time. I will never go back. I NEVER give a cop any excuse to put his hands on me. I am humbled by that experience. I learned a long time ago to keep my mouth shut in this type of situation. I held my opinionated thoughts to myself, and I just gave him the “I’m a journalism major and a photographer, and I take pictures of everything I see, I promise I am no threat to anyone here.” So after giving him that generic response, he sort of just stands there and stares at me for another 20 seconds, as if he is waiting for me to talk.

I keep my mouth shut. He mentions the Google Earth thing again. I feel like he is trying to get a rise out of me, but maybe I’m just paranoid. If there is bait there, I don’t take it. Then he goes on to tell me that, with all the calls from concerned citizens about terrorist activity on the light rail, he feels obligated to come and talk to me, just to keep up the appearance that he is checking me out and making sure I’m not a terrorist, even though we both know that I am not one. I just keep nodding my head in agreement to everything he says. It was an awkward exchange, and he hovered around me for a really long time as if he was waiting for some kind of response from me. After what seemed like an eternity he bid me an awkward goodbye, and ran across to the other side of the tracks to go on about his security duties.

I’ve been carrying my camera everywhere with me for about 3 or 4 years now, and that is the first time anyone has ever mentioned anything to me about terrorism and photographers. I think it says something about the current state of the society we live in. I don’t blame people for being vigilant, and speaking up when they see something that looks out of the ordinary. It’s too bad that more people don’t just approach photographers themselves and ask what they are doing in person, rather than make a phone call and say there’s a guy with a Pentax K-5 at the Light Rail Station taking pictures, he must be a terrorist, you better check it out.

This is what terrorism is right? They take away your sense of security. Now we can’t trust anyone because we let them get into our heads. We can’t have a normal conversation with each other in public for fear that one of us might be a terrorist. So we call the cops, and now if someone wants to ask me what I’m taking pictures of, it just has to be a guy with a badge and a gun. What happened to us? We don’t see the good in people anymore, we look for the bad and assume the worst.

For the record, I AM NOT A TERRORIST. I AM A PHOTOGRAPHER.

I think I need to get a t-shirt made and wear when I’m out and about.
I’m getting tired of the suspicious stares. I think maybe I will just start walking right up to those suspicious stare-ers and strike up a conversation with them. Maybe I need to be more proactive about this.

I used the word terrorist six times in this post. Make that seven.

The picture here is the best I could manage to get of the guy I talked to. He’s the guy on the right. I want to clarify, I don’t think this security guard did anything wrong, and I wasn’t offended at what he said to me. I get where he was coming from. I hated his Google Earth comment, it just made no sense to me, I didn’t even dignify it with a response, that’s how ridiculous that statement is. I don’t want to live in a world where all the photography comes from Google Earth, I will take my own pictures thank you very much.

Analyzing Friends
who would treat a friend like this?
master and servant

Something about this scene just bugs me. I don’t understand why the girl is making the other girl tie her shoe, and I don’t understand why the other girl is actually doing it. The two girls tried to get on the lightrail, but exited upon seeing the fare checker on board. Right after they exited the train, this was the scene that unfolded. I imagine an inconsiderate person, too lazy to tie her own shoe, willing to stick the dirty sole of her shoe all over her friends jeans and let her kneel before her to do the deed. I could be totally off base here. Maybe the girl has a back condition, maybe they are sisters, maybe I’m right and she really is a piece of work, I don’t know. I’m bothered by it. I don’t like seeing other people being taken advantage of. It is as simple as that.

Every Tuesday I jump on my bike and head down to the Light Rail Station, for a 30 mile trek across Denver to attend a Photojournalism class. I suspect the gentleman in the center of the frame might be an everyday rider.